Two Decades. Two Identities. It’s Going to Take Everything You’ve Got to Survive the Night. Explosive New Trailer Released for The Gallery

Navigate a story full of mystery and intrigue in the thrilling new FMV/Live Action Game and Interactive Film Hybrid.

London, UK – 23rd June 2022 . Aviary Studios is thrilled to unveil the official trailer for The Gallery, the highly anticipated FMV/live action video game and interactive film hybrid, written and directed by Paul Raschid, one of the most prolific creatives in this space. Scheduled for release from 1st August, 2022 on Steam (PC and Mac), Nintendo Switch, Xbox and PlayStation consoles, iOS and Android platforms. The Gallery is a thrilling combination of hostage thriller and social drama with a dash of world film festival cinema aesthetic.

This new, intense trailer has been created to engage both gamers and interactive film fans with its blend of powerful visuals depicting the games’ two time periods - 1981 and 2021, both of which are of considerable political, social and cultural significance in UK history.

Filmed over a 6 week period in February and March, 2021, the game immerses audiences in an interactive experience set in two time periods - 1981 and 2021 where players will face over 150 decision paths and 18 different endings over around 5 hours of content as they navigate a story full of mystery and intrigue.

The interactive authoring for The Gallery was provided by Stornaway.io. The Unity game engine build was undertaken by Edgeloop  Ltd.

Asked who they think The Gallery will appeal to they commented;

“I think The Gallery will appeal to many different viewers - not only the gaming community, who already have experience with this kind of story-telling, but also the film and TV genre audiences and anyone into thriller/action/drama really!” Said George Blagden.

Anna Popplewell added “For the gaming community, we hope it delivers perhaps a fuller and more detailed story than viewers might expect. And for those who might not be used to watching things with an interactive component, there is the thrill of a new way of storytelling.”

When asked how they found the experience filming a FMV / live action video game and interactive film hybrid the actors commented:

George Blagden said  “Unexpected, on every level.  I thought I knew what the process would be. I was wrong. It was 10 times harder, and more confusing than I could ever have imagined. I thought I knew what the outcome would be. I was wrong. The result is way more complex and detailed than I thought was achievable in a 6 week shoot. I can’t wait to try to find other ways of bridging this gap between films and video games with projects in the future”. 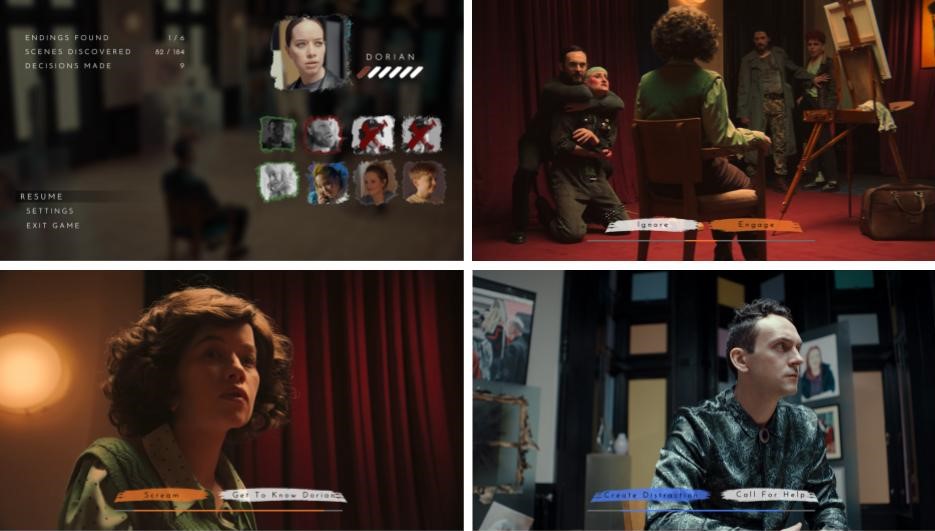 Fans can wishlist The Gallery on Steam now.

Paul Raschid (29 years); who wrote and directed ‘The Gallery’ is a born and bred Londoner. Paul’s 3 earlier live action video games – The Complex, Five Dates and Deathtrap Dungeon – The Golden Room - were released on Playstation, Xbox, Switch, Steam and Apps. ‘The Complex’ was also released in a linear version for TV and streaming.

‘The Gallery’ will be released both as a live action video game / interactive film and in a linear version for TV and streaming.

The CEO of Aviary Studios is Neville Raschid who had a 20 year career with Hollywood studios and leading entertainment companies including Paramount, Warner Bros. and Village Roadshow before becoming an independent film producer in 2002. He has produced 7 independent feature films since 2002. He formed Aviary Studios in 2019 to develop and publish a series of live action and animated video games under the title ‘INTERACTIVISIONS’. The Gallery is the first in the series.

Stornaway.io is a tech startup based in the UK, which lets producers create interactive immersive content and publish to multiple platforms. Created by video tech inventor Ru Howe and writer producer Kate Dimbleby, Stornaway is now being used by thousands of producers not just in entertainment but also areas such as marketing, education, tourism and recruitment to meet the increased demand for interactive stories everywhere.