HONEY, I JOINED A CULT LAUNCHES ON 3RD NOVEMBER

ASCENSION IS UPON US! HONEY, I JOINED A CULT LAUNCHES ON 3RD NOVEMBER

Sole Survivor Games’ debut title invites players to be the architect of their very own cult, managing everything from the leader’s unchecked ego to the location of the lavatories.

Thursday 22nd September 2022 – Team17 and Sole Survivor Games have today announced that groovy cult management sim Honey, I Joined a Cult, will be ascending out of Steam Early Access and into version 1.0 on 3rd November. Inviting players to cultivate their very own following, Honey, I Joined a Cult places players as the tycoon of their own cult. Design everything from the ground up, from the deity followers worship, to the location of the discombobulator - everything is in the player’s hands. Designing the cult’s base is but the first step to divinity; players will also need to balance the books with a host of dubious and expensive therapies for their followers. Law enforcement, government agencies, and angry protesters will also need their meddling mitigated, and the leader’s ever-growing ego kept in check.

During Steam Early Access, Honey, I Joined a Cult has launched three major content updates, expanding the variety of cults and game mechanics. Most recently, the Peace & Love update introduced six new themed rooms, two brand new endings to explore, new outfits, and a rework of the tutorial and prestige system. In March 2022, the Futurist Update took Honey I Joined a Cult to the final frontier, introducing new themed rooms, special characters and missions, new items, and updates to the Divine Inspiration and Research Tech trees. Full details for all Honey I Joined a Cult updates can be found on Steam.

With just over a month until full launch, the final roadmap for Honey, I Joined a Cult has been revealed: 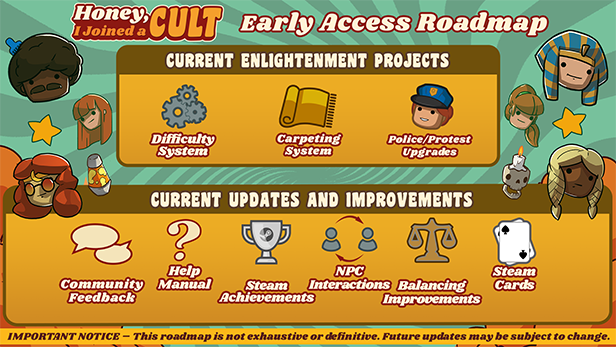 Would be cult leaders can purchase Honey, I Joined a Cult on Steam right now for $21.99 / €21.99 / £17.49 and can keep up to date with all the information on the game by liking us on Facebook, following Sole Survivor Games on Twitter and joining the Team17 Discord channel.

Sole Survivor Games is a UK based studio currently working on its debut title, Honey, I Joined a Cult. Visit www.solesurvivorgames.com for more info.

Founded in 1990, Team17 Group plc is a leading developer, video games label, and creative partner for developers around the world. Floated on AIM in 2018, Team17, with its extensive portfolio of over 100 titles, embodies the spirit of independent games. In addition to the award-winning Overcooked!, Yoku’s Island Express, and the iconic Worms, which celebrated its 25th anniversary in 2020, Team17 has helped bring critically acclaimed titles including Hell Let Loose, Moving Out, Golf With Your Friends, Yooka-Laylee and the Impossible Lair, Blasphemous, and The Escapists to gamers everywhere. Visit www.team17.com for more info.