London, UK - 20th January 2023. This is your chance to get some early hands-on time with the upcoming comedic, physics-based action co-op game Filthy Animals: Heist Simulator from Green Man Gaming Publishing and developers Pewter Games and LoPoly. Registration is now open for you and your friends to join a rag-tag team of mutant animals in hilarious heists and test the online multiplayer experience ahead of the launch later in Q1.

The first playtest starts on 20th January, with more tests planned leading up to the official launch on Steam. To register, simply head over to the Steam page to sign-up and enter your details before the test starts, and you’ll be first in line to take part in some chaos-filled animal-heist fun. Don’t forget to check out some advice on how to master your character’s special moves straight from the mouth of Tony, the fast-talking criminal mastermind of the Filthy Animals heist operation, in the community update here. 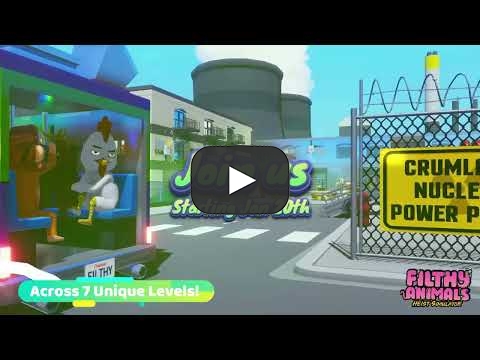 Filthy Animals: Heist Simulator is a chaotic multiplayer Heist game for 1-4 players, spanning across eight different chapters featuring a total of 21 unique heist levels! Take on the role of mutant animals following the orders of Tony, the Filthy Animal Bossman Criminal Mastermind. Wreak havoc through a series of heists, starting with a convenience store, a bank robbery and then break into a super secret military base, with missions ranging all the way into outer space!

Filthy Animals: Heist Simulator will be published by Green Man Gaming Publishing and scheduled to launch for PC in Q1 2023. Wishlist the game on Steam now!

Founded by Christopher Conlan and Ben Clavin, Pewter Games Studios is based in Ireland. In 2016 they released their first title, The Little Acre. Their next game, Filthy Animals, is due to release in 2022. Visit https://www.filthyanimalsgame.com/ for more information.

Founded in 2012 by Dublin based developer/musician Brendan Sutton, LoPoly has been making a name for itself by releasing small, award-winning games online, as well as expanding their talents into other forms of media. Their first commercial game, Filthy Animals is being co-developed with Pewter Games Studios and is due to release in 2023.